About the villages of Hartley Wintney, Hook  &, Odiham 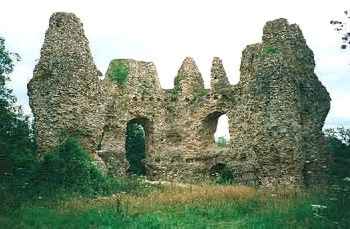 Odiham Castle was originally a 13th century stone fortified hunting lodge, founded by King John. Built in 1207, a square inner platform encased by a moat, supported a rampart and the 'domus regis' or king's house. The siege and capture of the castle in 1216, by Prince Louis of France, led to the destruction of most of the early buildings. After its recapture in 1217, a great three storey octagonal keep, encased by a circular moat was constructed. Built of flint walls with stone dressings, it stands in the center of the inner ward, which was also defended by a 14th century palisade and ditch. By the 15th century, the inner moat had been in-filled and the castle in use as a hunting lodge again. To the south-east, is a rectangular outer ward, encased by a moat but sadly its been bisected by the canal.

Celtic remains have been found locally as well as the remains of a Roman villa at Lodge Farm but the roots of Odiham's history are in Saxon Wessex. The name comes from Anglo Saxon Wudiham or settlement on the edge of wooded land. North Warnborough takes its name from the river originally called the Weargaburna or ‘felons' stream' where malefactors were drowned. In the Domesday Book of 1086 Odiham, as a large royal manor, was the first entry in the Hampshire folio. At least two churches are recorded suggesting Odiham was a former minster serving a large area. The core of the settlement would have been the Bury.
As Odiham was half way between Winchester and Windsor it was a frequent stopping point for Norman kings. King John built the castle here about 1200 on the site of an earlier residence. In the twelfth century a large deer park was created to cater for the royal love of hunting. The park stretched from the northern boundary of Odiham High Street to the line of the M3 and its western boundary still defines the eastern limit of North Warnborough. Although the deer park has been used for agriculture for at least 400 years its outline is still of vital importance in influencing the layout of settlement today.
During the medieval period Odiham became a market town serving the surrounding villages. The wide High Street, with narrow burgage plots facing the road, was created as the market centre about 1200, taking the focus away from the Bury. A map of 1739 shows a market hall in the centre of the High Street near the junction with King Street.

Hook in the Good Old Days  Click on this  LINK

The earliest mention of Hook so far found in historical documents was in relation to a land dispute in the thirteenth century. The village of Hook did not, at that date, exist, but there were a few scattered houses and farms alongside the main road to the south-west of England. That main road grew in importance over the centuries until it became the main stage coach route from London to Exeter.
By the eighteenth century, a number of inns had appeared, to serve the travelling public, and small hamlets had grown up around them. In the late eighteenth century a turnpike road was constructed to aid the navigation of the steep Scures Hill, to the west of the village. This was one of a series of turnpikes throughout the country, which enabled stagecoach travel to become faster and more regular. Travelling became more commonplace as a result, and the inns which catered for the travellers prospered.
In the 1830s, a railway was built, which passed through Hook on its way from London to Basingstoke, but there was no station built here. A number of local landowners campaigned for a station between Winchfield and Basingstoke, so that timber and crops grown in the area could be sent away for sale. In 1883, their campaign was successful and Hook railway station was opened amidst general public rejoicing.
The opening of the railway station signalled the birth of the modern village of Hook. Houses were built for the railway workers, and for the workers in the businesses that sprang up around the station. Some workers began commuting to Basingstoke, and later to far-away London.

Situated in North East Hampshire, Hartley Wintney is a rural village with a wealth of history, surrounded by idyllic countryside. With a population of approximately 5000 people, the Parish includes Phoenix Green to the south and the adjoining hamlets of Dipley, West Green, Elvetham and Hartfordbridge. The Parish includes large wooded areas such as Yateley Heath Wood and part of Hazeley Heath as well as large expanses of common land with the famous Mildmay Oaks at its centre. The River Hart flows to the north-east of the village with the River Whitewater forming the western parish boundary.

The village is twinned with Saint-Savin near Poitiers, France and with Malle, famous for its Trappist beer, near Antwerp in Belgium